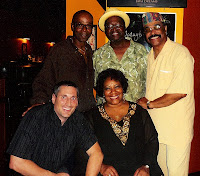 Since 1994 I have been following the talents of a local singing group named “SOUNDS OF INTEGRITY” I remember the first time I witnessed their talents. It was in April 1994 at The Cleveland Hilton South Hotel, now the Doubletree Hotel, perched atop the slope overlooking downtown Cleveland---off of Rockside Rd. I was accompanied a longtime friend since High School in the rather classy hotel lounge after a Cleveland Indians baseball game----during the same week former US President Richard Nixon passed away.

After the game we thought we would grab a quick drink and a snack---and this is when I was drawn in by a singing group actually singing the tunes and music genres I thought I’d never get to hear live---and thought were lost closet classics. The Sounds Of Integrity have been singing for many years--and singing , according to me remembering a comment by one group member, was a family passion since childhood.

By now, you are probably wondering what kind of music they sing. Well, you name it and they’ll probably be better at it than some of the original artists. Genres ranging from 1950’s Doo-Wop, to 1960’s Classic R&B and Soul, to Philly Soul, Jazz and Motown….to Adult Contemporary and even Disco---to today’s popular Easy Listening tunes of all the same genres I just mentioned. Motown, If you think none of this is not your cup of tea, think again, because they please crowds of all ages and all walks of life!

If you enjoy the following artists, you’ll love a night out with The Sounds Of Integrity… Artists such as The Delfonics, Blue magic, The Temptations, The Stylistics, Earth, Wind and Fire, Tavares, The Doobie Brothers, Michael McDonald, Billy Joel, Barry White, Marvin Gaye, Natalie Cole, The Whispers, Frankie Valli, Mel Torme, Babyface, George Benson, Swing Out Sister, Anita Baker, Aretha Franklin, Oleta Adams, Roberta Flack, Bloodstone, Harold Melvin and the Bluenotes,, Gladys Knight and the Pips, The Manhattan Transfer, Glenn Miller, Louis Prima, Heatwave, and the list can go on and on---The Sounds Of Integrity have many influences. The best part of the show its that they get the audience involved. They are very personable and will walk right up and sing next to you with the mobile microphones.

The group usually do the vocal performance with customized quality soundtracks to the particular tune---but can play with a live band as well. They are such good singers, that I often thought that they sound excellent with no background music at all---just straight vocal harmonies. So if you are in for a special and fun night out--and you’re in the Cleveland/N.E. Ohio area, you have to check this out! You may not be the greatest dancer, but you’ll be chair dancing and foot tapping the whole night through.

I am glad I have had the pleasure of acquainting with The Sounds Of Integrity all these years, The group is led by husband and wife lead singers, Ramon and Margo Scruggs. Ed Blair rounds out the usual trio. Folks, if you’re reading this, what was the name of the great new addition?… The guy with the really deep voice? Sorry, I allowed the name to slip passed me when I was so taken by his singing style! This blog spot is a tribute to them and a THANKS for making every evening I saw you sing, a very fun one!

Photos: Me, Maria, and Sounds Of Integrity
Posted by Angry Man In The Basement at 1:11 PM

Email ThisBlogThis!Share to TwitterShare to FacebookShare to Pinterest
Labels: all things cleveland, singers, sounds of integrity