Cleveland and Similar Cities of the Nation’s "original" big cities--are being reborn, and not necessarily "dying!"’ 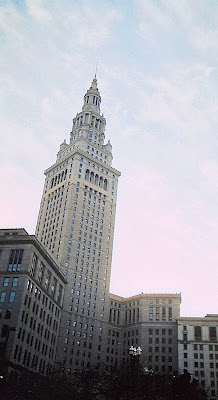 A recent Forbes Magazine article examined what it saw to be America’s fading cities. The article seemed to be basing its "dying city" criteria on holding such cities to the level of success they had in the past---or what they used to be---as their model for what they should still be today. But if they are short of that level of success, then the city must be a failure by Forbes criteria. I believe lists and labels like these Forbes regularly produces are often misleading. Here is why.....

If one expected a city like Cleveland to be the KIND manufacturing powerhouse of a city it was in the past to be the same hit in the now and future, then of course such a city would be viewed upon as "dying" because most of America's original manufacturing base has been shipped out steadily over the years due to globalization of the economy. Such is not endemic to Cleveland. Forbes also ignores the fact that some cities like Cleveland, through this economic evolution, are slowly re-inventing themselves. This can take a long time to shed years and years of what has been an economy built solely around a base of manufacturing.


Forbes assessments are also misleading because because with urban flight, subsidy of suburbs, and other push and pull factors, Cleveland, for example can not be expected to be the kind of city it was when it stood alone, with so much surrounding competition in a highly populated region of the state of Ohio. Additionally, and more recently, it has been stressed by a lot of failed economic policies from a federal level and a slew of predatory mortgage lending. (remember this, Ohio, in November!)

More encouraging as Cleveland re-invents itself, it has a lot going for it. Among some of these attributes start with the character and integrity of the people who get involved in their community. It is actually a city steeping with progressive activism that refuses to succumb to hard economic times. It is a city with a street grid and plat that was pedestrian orientated, walkable---and green before green was cool. The park system is stunning, health care world class....art history and culture attributes second to none--and a new wave of high tech research and education will help shape part of the future of the city’s economy.

Forbes also cited population loss as a factor of a dying city ( but ignores the fact that most older major cities have indeed lost population within their propers and continue to do so) BUT, population numbers can deceive: Let’s take a look..... While inner Cleveland has dropped in population numbers, Greater Cleveland is basically stable. We need to look at things from a regional perspective before we say 'woe is me' to the bigger picture.

Ironically though, it seems Forbes takes into account other city's metro-regions when making their population judgments, but does not observes Cleveland's. The reality is many people have not left the area, they have just crept over the imaginary line to a nearby suburb---but, many more well to do professionals, retired empty nesters, etc. are moving back into the old city as neighborhoods slowly see revitalization.

Population wise, old Cleveland proper is focusing on quality instead of quantity. Add to the above, sunbelt cities (which Forbes regularly ego-strokes) for example, who’s mild weather conditions help them avoid some population loss. Have you ever experienced what a north eastern mid-west winter can be like?

One other thought to consider why it can be misleading to simply label such a city or metro area as “dying” is that while cities like Cleveland were among the nation’s "first" and original big cities already boasting all the infrastructure, art, history, culture and convenience as we expect of cities, places like the much touted Charlotte, Phoenix, Tampa, or Portland, were mere outposts---AND, therefore they have yet to go through the "growing pains" of heavy decline, or in some cases never have because they have only within the past 30 years, become legitimate major cities.

Cleveland's and other rust belt cities economies from the start were destined to decline as a global economy would eventually undermine local economies--essentially forcing cities like Cleveland to re-invent. Again, re-invention after so many years of depending on a specific economy as the backbone of success takes time---And a city really should not be deemed a failure or dying while it goes through the metamorphic process that will have it become something new.

I don’t want to sound as though I am picking on other cities (what the heck, though, people have been laying it on Cleveland for years), but It is apparent that in some places, there is no evidence of a city with the cultural or other kinds of "infrastructure" that suggested a vibrant past. Rather, places like Phoenix or Las Vegas are merely large populations who just grew old, cold, and retired---or are young, and heard from a friend they need to move to the sunbelt to be a success. So in reality, such a place carries a great population and that’s about it. I refer to such places as "pretend cities" Some of the cities

Indeed, Cleveland is re-inventing itself---being reborn into a city with a town center which features what they originally were all about from the start---a place where independent small retail and other merchants such as, artists, restaurants, grocery, etc. as well as necessary business, arts, and residential needs will thrive. Cleveland is also becoming a place where more emphasis is placed on "green collar" jobs, greener, cleaner industry.

I will be the first to knock the local self esteem issue that often prevails and say people who live here and who have moved elsewhere from here, need to stop with the archaic knocking of this town/area and develop a better sense of of civic pride by learning about their city's proud past and all it has to offer currently--and then see it for what it could and should be---and then try to be a part of solutions rather than a part of the problem.

Forbes portrayal of such cities like Cleveland, though, do no favors in changing local images, self esteem, or civic pride, OR, to attract new investment and population. Instead, the attitude merely piggy backs on outdated stereo-types of Cleveland and similar cities. So for this I say... Shame on Forbes and their lack of disregard for many of our nations original big cities which were major players in its formation and today's success.

Photo: The Terminal Tower and Downtown Cleveland as viewed from the west
Posted by Angry Man In The Basement at 11:56 AM