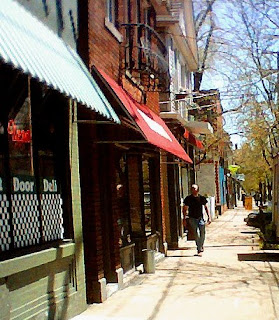 The Old World Shopkeeper Way To Start The Day!


Remember when the old downtown shopkeeper used to have a daily routine before opening the shop that would consist of a 20 to 30 minute chore session which would include jobs such as quickly washing/sweeping the front walk, washing windows, spraying down store facades with the hose, picking up litter and viola!---then the open sign would be flipped over? On a regular basis, many merchants would even apply a fresh coat of paint to preserve and beautify the store facade . This made the core city old storefronts last forever and maintain their charming architectural appeal. How often do we see this happening these days? I don’t see it very much or at least as much as it really should be done!

Many storefronts are allowed to deteriorate to the point they become unattractive to patrons. Such storefronts, with their old world charm, coziness, and romantic allure, are what separates the core city from the suburbs. When left to decay by not doing the simple things mentioned above, we witness one more element of the kind of urban decline that contributes to sending life in the city packing or going elsewhere. Simply put, it is a symbol of neglect and lack of pride that does not exude confidence in our town.

By doing simple ‘little shopkeeper’ daily routines, we can assure out retail core in Cleveland remains attractive and competitive--hence attracting more urban activity inward toward the urban hub, and not sprawling outward and becoming a part of energy consumptive sprawl. Places like Crocker Park and Legacy Village are great retail centers, but are mere paper tiger imitations of what we already had in the Central Business District--but still, those areas are heavily shopped mainly because patrons are attracted to the fresh look and feeling of safety they offer.

When urban retail cores are allowed to slip beginning with not doing the small things mentioned in this article, or even by law enforcement not nipping potentially small crimes that could lead to bigger ones, in the bud----more and more potential patrons will opt for supporting the suburban mega store---or the imitation downtowns like C.P. and L.V.

At the very least, picking up litter on a daily basis around your property makes a world of difference. Even something as simple as refreshing vegetation planters with native wildflowers is a sign of attentiveness, pride, and care. As I walk through the Flats and Ohio City, in many places it looks as though none of the above is ever done---or at least not nearly enough. It’s time we all pitch in and do a better job in performing all of the above; especially the commercial buildings and properties., because these are among the first areas visitors see --- and will help shape the first impression of our city.


Another idea to improve the downtown storefront scene revolves around better presentation of downtown empty storefronts. Places that stand empty, have sat empty long enough with the basic "shoe polish smeared on windows with a 'For Rent' sign hanging on the door" Perhaps a more attractive way to present such space until it becomes rented out would be to allow local artists/designers and window merchandiser displayer to create art murals, and samples as to how such a downtown empty storefront COULD look when done up right.

Many malls implement such a plan. The Galleria does it now. I think it would exude a much better and more positive atmosphere than seeing, for example, the place on the corner of 4th and Euclid sitting so long with dirty windows and an array of construction debris and equipment scattered all around within.

Additionally, if done well, I think this would help to inspire more passersby who may be business inclined, to consider the possibility of opening up shop downtown. Having storefronts prepared and presented like this--and with a "FOR LEASE/RENT"--or "OPEN YOUR BUSINESS HERE!!!" posted as well.... Sure beats the old show polish method as described earlier. I think the best it offers is the aspects of presenting a more rejuvenated atmosphere, rather than a empty and desolate one.

Photo: Storefront Scene in The Cleveland Neighborhood of Tremont
Posted by Angry Man In The Basement at 1:47 PM